At the Film Premiere in Darlington


The big day has finally arrived. After a great world premiere in Bremen on the third, yesterday we organised the UK screen premiere to a packed-out audience at Darlington Arts Centre.
Posted by inconvenient_truth at 15:50 No comments: 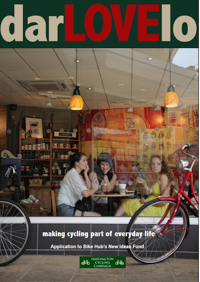 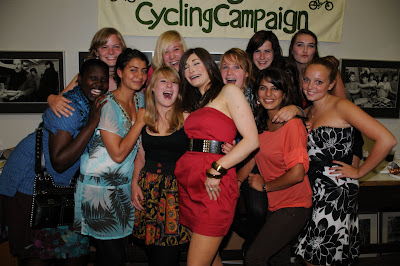 Richard Grassick, one of Darlington Media Group's producers of the Beauty and the Bike project, is interviewed by Councillor Nick Wallis, Darlington Borough Council Cabinet Member for Climate Change.
Posted by inconvenient_truth at 15:30 1 comment:

Back in Darlington after a wonderful and informative trip to Bremen, the girls in the project now find out if their cycling habits can become permanent in Darlington - even when our cycling infrastructure is still in its infancy.

This short video edit follows one of the girls, Lauren Pyrah, from her original interview in July 2008 to her current impressions, now she has been to a cycling-friendly city and returned to Darlington.

Lauren has hired one of the Velodarlo Dutch Bikes. She will be blogging her experiences on Darlington's streets on this website. Just select "Lauren's Blog" from the BikeBeauty Blogs drop down menu on the left of this page.
Posted by inconvenient_truth at 15:27 No comments:

The Forgotten Art of Political Rebellion ?

Our project includes a youth exchange with the German state of Bremen. On Monday one of the project's researchers met Dr. Reinhard Loske, Bremen's Senator for the Environment, Building, Europe and Transport, to discuss his work on improving Bremen's already good cycling infrastructure.
He also appears in the following video, advocating speed limits for Germany's motorway network. In fact, he is imposing these speed limits on all the motorways in Bremen State anyway.
In Germany, motorways without speed limits is gospel. Like America's freedom to bear weapons, the vast majority of Germans see fast driving on motorways as sacrosanct. Dr. Loske is not exactly the establishment's favourite politician, limiting their god-given freedom to burn fuel. But he understands when it's necessary to confront national orthodoxy - to rebel. Even when this means taking on the most powerful political lobby in Germany, the car industry.
Our own "national orthodoxy", as far as transport is concerned, also revolves around the car. To deny our citizens their god-given right to drive the kids 500 yards to school, to the shops, or to the local office, is not only too much for our politicians, but "corridors of certainty" are required to make the trip faster, easier, and more direct.
Heaven forbid the idea that we might disrupt this sacred tarmac by taking a square inch of road space away from the car to construct safe cycle paths. The only space available for such fanciful stuff round here seems to be pavements. If there is a definition of the political rebel that we need here in Darlington, it is the politician brave enough to state the obvious - road space, especially on our main roads, needs to be taken from cars.
The local authority have successfully encouraged many Darlingtonians to switch from car to bicycle. But a cursory count on the streets of the town will tell you that, unlike we seasoned cyclists, these beginners are very often seen on our pavements. The main roads are clearly regarded as just too dangerous.
Our "national orthodoxy" reaction to this, of course, is to curse and scream at those wicked cyclists - and we all know how easily this attitude spreads to include all cyclists. But the brave politician, the politician willing to reflect and understand, must rebel against this orthodoxy, defend cyclists, and state the obvious conclusion. These new cyclists need proper infrastructure.
So until the day we hear this on our own transport agenda, lets celebrate the art of political rebellion, German style with this short video.
Posted by inconvenient_truth at 15:19 No comments:


The last evening in Bremen. At our farewell party, Harri and Ricarda look back on a couple of the highlights of the week. Roll on July, when the German girls come to Darlington!
Posted by inconvenient_truth at 15:18 No comments:


Lauren describes day three. We checked out a street (Hamburgerstrasse) that was redesigned in 2004 to accommodate a cycle path on each side of the road. Then we met the traffic engineer who designed it, and the politician responsible for traffic.
Posted by inconvenient_truth at 15:17 No comments:

Kate sums up the second day in Bremen.
Posted by inconvenient_truth at 15:16 No comments:

Sofija Kriauciunaite has just arrived in Bremen with the rest of the Beauty and the Bike girls from Darlington. Here she gives her first impressions of the place.
Posted by inconvenient_truth at 15:14 No comments:

Why Do Girls Stop Cycling?

Our project is founded on the fact that girls in cycling friendly countries continue to cycle into adulthood, whilst in other countries - like the UK - they tend to give up during the teenage years. Why?
Posted by inconvenient_truth at 15:12 No comments:

This week, a group of girls from the project are travelling to Bremen to meet - and live with - the German teenagers who have been involved in the project. The production team have been carefully figuring out who might be best suited to host which of the Darlington girls. Well this week we find out if we have made the right decisions. There's quite a busy schedule to get through. After collecting hired bicycles on Tuesday morning (naturally, we'll be getting around by bike), we visit the city centre and town hall. On Wednesday and Thursday, we are studying cycling infrastructure and routes that have been selected by the German girls. We also have a date with the Staatsrat responsible for traffic, Wolfgang Golasowski.On Friday we'll be editing the material shot during the previous three days into a short film. This will be featuring in the Urban Paradise project organised by our Media Workshop partners in Bremen, Schlachthof.
Posted by inconvenient_truth at 15:08 No comments:

This short edit now includes material shot in Darlington's Pedestrian Heart, one of the few places in the town where our cyclists can pace themselves in a way that better suits their cycling style. Never underestimate the psychology of cycling onroad with fast-moving cars, and feeling the pressure to always cycle faster than you really want to.

Gentle Cycling is indeed the norm for cycle-friendly towns and cities. Anyone interested in cycling as a means of transport should spend some time observing the speed, posture and facial expression of cyclists forced to share busy urban roads, and compare these with the teenagers in this film. It seems that we Brits are being asked to consider adopting sports cycling attitudes, speed and clothing for city cycling purposes. Is it any wonder then, that so many more men than women cycle in the UK?

The lessons for infrastructure development seem pretty clear - good cycle path infrastructure on all busy main urban roads, and traffic calming on all other residential streets. Not exactly rocket science.
Posted by inconvenient_truth at 14:02 No comments:

This is the first edit of some of the material we shot over the summer of 2008 in Bremen, Germany and Darlington, England. It establishes for the first time the feel and direction of the film project. Beauty and the Bike takes as its starting point the way teenage girls see cycling in both countries. Rather than dismissing British teenagers' attitudes towards cycling as "uncool", we ask "why are attitudes so different"?

For policy makers, parents and cycling professionals in the UK this is an opportunity to learn from successful European cycling cultures - and perhaps to admit that the British approach to developing cycling infrastructure is not simply unattractive, but unsuitable, for many potential cyclists.

As further edits are produced, these will be posted here.
Posted by inconvenient_truth at 13:23 No comments: